“The visitors seemed to be very interested in our mobile application, ‘APP Valencia’, which informs to the citizens, in real time, about everything happening in the city and shows lot of information to everyone. This kind of app is apparently not common in American cities. Other visitors were really interested also in our applications for administration (eGovernment and integrated paperless administration). The visitors asked us if we are interested in sharing our applications with other cities, and at this point, of course we are ready to share best practices and cooperate further.” Gema Roig from City of Valencia.

The exhibition on 1st June gathered more than 1,000 visitors and 65 teams demonstrating smart city applications. At the FIWARE booth, Binee UG from the “Binee” team demonstrated their smart bin and app for rewarding and improving recycling in the cities; Teamdev showed the “TripStories” smart tourism and mobility application destined at supporting a better environment; and Open Data City from “WeBuildCity” showcased their Open and 3D City Development Platform for Urban Planning. The City of Valencia (Spain) presented several applications deployed in their city, including the “App Valencia” City mobile application, the Valencia eGovernment Integrated Platform, the Valencia Smart City Platform, and the Valencia Transparency & Open Data Portal. 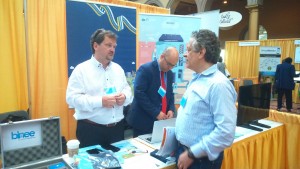 The FIWARE booth was very well attended by many visitors all throughout the day. There was a good and continuous turnout, with different profiles, from small companies to universities and cities. Most of the participants showed genuine interest in FIWARE and as a result there were some very interesting interactions, opening up potential opportunities for FIWARE and for the start-ups in the USA and for the City of Valencia for future cooperation with US cities.

A dedicated FIWARE session allowed the FIWARE team to provide the audience with more details about the platform and the ecosystem, and the smart city applications being demonstrated at the booth. As a consequence, a number of people showed up afterwards at the booth to get more details and demonstrations.

The FIWARE team also attended the workshop on 2nd June, which gathered around 100 participants. The main issue 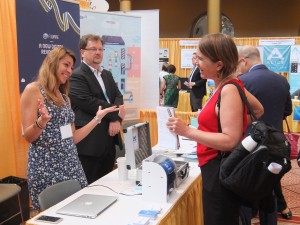 that was raised by the US participants was the following: most cities are applying some smart solutions in their cities in the areas of energy, transport, safety, health, etc., and universities develop small pilot trials in those domains. However the cities do not have an integrated smart city strategy although they would like to share more what they do; and the universities are looking for solutions that would allow different applications to interoperate and be tested on a larger scale in several cities. There seems to be a real need for an integrated system/platform such as FIWARE, which was explicitly mentioned several times during the workshop. This was also highlighted in the main issues that are foreseen for the upcoming NIST framework for the Global City Team Challenge 2016, which shall be defined shortly.

In conclusion, FIWARE principles have been very well received during the exhibition and the workshop, and several universities and cities showed interest in exploring it further. Let’s make this happen through FIWARE Mundus!

“As coordinator of one of the [FIWARE] accelerators, I feel personally responsible for the success of the start-ups involved. I really believe that in this matter the three start-ups made great progress. I foresee that in within the next 6-12 months, we will be able to convince much greater audiences, and to me the Washington case was a proof of this.” Olaf-Gerd Gemein, SpeedUpEurope project coordinator.

Contact point for FIWARE and the project teams in the USA: Jesse.SPECTOR#arroba#eeas.europa.eu

What do participants think?

“OpenDataCity as a company attracted surprisingly much interest from different groups – surprisingly, because the US is pretty strong in the field of data visualization already. People showed interest in our work with open data from cities, and especially in our general ability to make sense of and to find stories in huge datasets. I definitely made some interesting contacts for OpenDataCity.” Lisa Ros, OpenDataCity, “WeBuildCity” team

“We have been contacted by some US universities interested in our work, which could provide us with the opportunity to extend the collaboration that we currently have with some Italian universities. We have also started a dialogue with the Italian embassy in DC that wants to promote our work in the USA. And we have had the chance to better understand the US point of view on smart cities and, generally, on the ICT theme and this will be useful for our future approach into the US market.” Andrea Cruciani, Teamdev, “TripStories” team

“It was a great opportunity for us to showcase our project in front of an international audience and we were very proud to attend the event as part of the Fiware and the SpeedUP! Europe Team. Our booth and our prototype attracted many curious visitors among which there have been several potential clients and investors. Several municipalities showed great interest and we received useful leads for other cities too. The GCTC conference was a very a positive reinforcement for us that we are on the good track and there is a strong demand for our product even in markets outside Europe. We were also able to connect with several other companies and startups who might be interesting partners for us for further technological development.” Szilvia Varszegi, binee UG, “Binee” team

“As the representative of the EWE AG from Germany and support of binee, the GTCT Expo was a great platform to pitch enera, our “Energiewende” demonstration project.  There were new and interesting things popping up that reflect current trends in the energy market & smart cities that will lead to further talks.” Florian Fischer, EWE AG, Business Development Manager enera Project, “Binee” team.

“Some great innovations, and all around a wonderful representation of European entrepreneurialism!” Jesse Spector, Policy Officer, Digital Economy & ICT at EU Delegation to the United States

“Thank you all for this opportunity to visit Washington and this conference!” Lisa Rost, OpenDataCity, WeBuildCity

“It has really been a great experience” Vicente Rodrigo, Head of Area Development and Innovation, ICT Department, City Council of Valencia

“Thank you for this awesome opportunity!” Andrea Cruciani, TeamDev, TripStories

“It was great to be part of a larger European team, because […] the different projects reinforced each other and as a team we received more attention from the audience” Szilvia Varszegi, binee UG

Learn how to develop an app like Fonesense with FIWARE