The battle over the “Internet of things”

The following post is an adaptation of the article written by Erich Möchel and published in FM4.ORF. We would like to thank him for his interest.

This week, an open-source project funded to the tune of millions by the European Commission will be making a four-day appearance in Vienna.

Starting yesterday, Vienna will spend four days at the centre of a major European Commission project called FIWARE. This research and development project has 300 million euros of funding and is a significant technical component of the European Commission's digital agenda. FIWARE is a flexible open-source cloud system with a host of standardised interfaces that are compatible with any software. This cloud was primarily developed to process data from the "Internet of Things" – such as office and building control systems, manufacturing facilities, telemedicine and smart cities.

The actual applications for this ambitious open-source project are intended to come from European small and medium-sized enterprises, for whom the workshop has been expressly designed. 80 million euros of direct funding has been set aside for SMEs. The big partners in the project (Orange, Telefonica and several other large European telecom firms) will remain in the background here, although they will provide development teams. They see good prospects of finally being able to hold their own against the Internet giants of the USA.

At the start of April, the independent IoT developers of Vienna assembled for a hackathon as part of World IoT Day. As well as the software, the hardware for almost all of the components is freely available and is thus fully customisable.

The Commission is working towards abolishing net neutrality, which will allow telecom firms to create a separate channel for data, particularly in mobile phone networks. These "managed services" will constitute around 20 per cent of all mobile data, according to EU Commissioner Günther Oettinger, and are intended for critical systems.

This includes applications for specific areas in healthcare, such as remote diagnostics via local sensor networks, or the remote operation of medical devices. It also includes emergency and alarm systems, all communication systems used by emergency services and governmental bodies, and the increasingly large volumes of data captured by all kinds of sensors in networked road vehicles. All of this represents an enormous emerging market that American Internet firms are not just targeting, but have already begun to capture.

The workshop in Vienna is practice-oriented, and alongside general cloud applications there will also be demonstrations of applications specially designed to connect with the Internet of things. 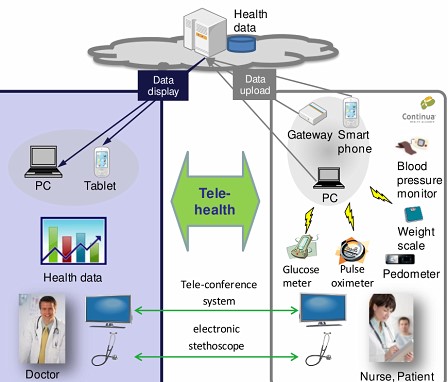 From an ITU document on the subject of health data. Every concept beginning with an 'e' in TCP/IP jargon (such as 'e-health') has the prefix 'tele' in the telecommunications sector. However, the figure scarcely shows that the Internet plays a crucial role in the illustrated application.

An open-source system like FIWARE – which is developed by a wide-ranging set of partners, follows a unified set of technical standards and is making a name for itself as an "ecosystem" – has a good chance of standing up to the American onslaught in this new marketplace. It's no accident that FIWARE is based on Open Stack – an established cloud platform that is compatible with Amazon Cloud Services. This allows even large cloud applications to be migrated from one system to another without having to reconfigure everything from scratch. 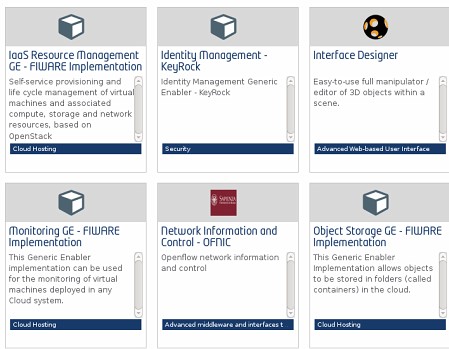 Excerpt from the FIWARE developer toolkit

Open Stack was originally developed by the US cloud firm Rackspace in cooperation with NASA. The industry giants Intel, IBM, Oracle and Red Hat soon got involved, with SAP becoming the latest big addition in 2014. IBM and SAP are unsurprisingly also involved in the FIWARE project. SAP is the global market leader in enterprise software, and is naturally keen to expand into machine operation in future. IBM on the other hand is set to lose out on any alliance involving Google or Apple, since both of those firms are direct competitors of IBM in the cloud sector.

Just like the telecommunications firms, the two software companies are showing restraint when it comes to the FIWARE project. Although communal projects of this kind normally have a web presence decked out with corporate brands, the various FIWARE websites scarcely have any logos on display. The involvement of some of the big players can only be seen through the email addresses of employees assigned to the FIWARE project to work on specific modules.

How the FIWARE cloud works 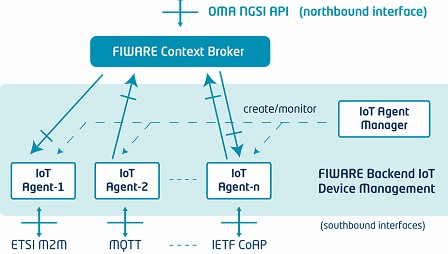 As well as the aforementioned services, this software ecosystem primarily consists of interfaces and connecting units (so-called 'middleware' applications) permitting the connection of protocols and applications that are technically not directly compatible with each other. An example of this is the 'IoT Context Broker' module, which controls sensor networks and allows readings to be taken automatically. FIWARE can use a range of current protocols to communicate with users and objects. That makes the 'IoT Context Broker' compatible with very different protocols, such as COAP or ETSI M2M.

COAP originates from the IETF Internet standardisation body and is compatible with HTTP. This allows values transmitted by sensors to be displayed directly in a browser window. ETSI M2M, by contrast, is a completely different protocol from the telecommunications world and was developed by the European Telecom Standards Institute. It is part of the GSM family of protocols and is designed to process data that will come from the mobile phone networks' managed services channels in future. In other words, this channel is identical to the so-called 'fast lane on the information superhighway', which telecom firms originally wanted to create for broadband entertainment services such as video streaming (for an additional fee). 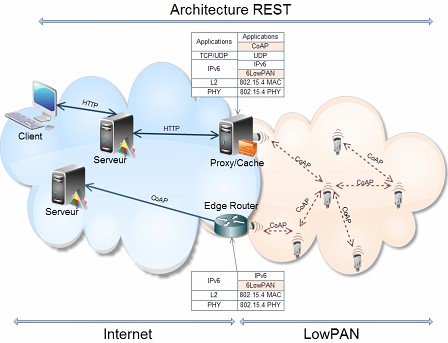 The FIWARE framework can therefore run both on an international cloud network connected to a telecommunications network, and on a rented mini-cloud on a local data centre for the benefit of smaller companies. The COAP protocol in turn is used by independent communities of IoT developers around the world, such as small businesses, universities and individual 'makers'. Using a standard Raspberry Pi as a mini-server, Arduino micro-controllers as switches, and an ever-increasing array of sensors, it is possible to construct a basic network to control your home for less than the price of an iPhone.

At the same time as the event in Vienna, a two-day FIWARE hackathon is taking place in Nice with the theme "Smart Citizens in Smart Cities" and a prize fund of 20,000 euros. In May alone, a dozen FIWARE events took place across Europe, each lasting several days. Some of these were not so much dedicated to technical development as they were to financing rounds for start-ups, since FIWARE is also a kind of incubator project for new European companies.

It is impossible to give even a rough estimate as to how things will develop in the IoT sector, given the huge number of possible applications and the bewildering array of partnerships and alliances that have formed outside Europe. The only certain thing is that – in terms of volume – this is the largest initiative to promote open-source software that Europe has ever seen.