FRACTALS project has awarded 43 European IT SMEs and Web Entrepreneurs with up to 150,000 € each!

These are, in brief, the results of the accelerator Open Call for innovative smart agricultural solutions:

FRACTALS Open Call received 270 proposals from startups, SMEs and entrepreneurs coming from 26 countries. After several evaluation rounds with more than 100 evaluators from all over Europe participating, FRACTALS consortium invited 43 of those proposed projects, coming from 12 countries (country distribution shown in Graph 1), to receive funding and mentoring and to support them making use of the FIWARE technologies in order to create market-ready applications for the agriculture, one of Europe’s most strategic priority areas.

In total, the requested budget from all the applicants add up to 30 million €, where 257 proposals were eligible (95,5%) and went into an evaluation process that was finalized by the end of April 2015.
Two thirds of eligible proposals (176 of them) were aiming towards a budget higher than 100.000 € (as shown in Graph 2), while the average requested budget per proposal was around 115.000 €.

It is of great importance to underline that FRACTALS Open Call has received a high percentage of proposals coming from ICT SMEs and Web Entrepreneurs located in countries outside of the six FRACTALS partnership countries: 113 proposals, more than 40% of the total.
Out of short listed project proposals, 151 proposals asked for maximum of 9 months project duration, which is slightly above 58% of a total number. On the other hand, only 6 proposals (2,3%) asked for 4 months time frame. 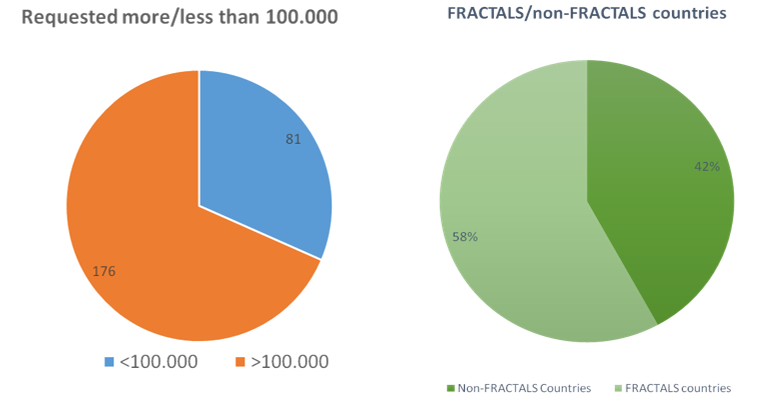