With the collaboration of Promálaga and the City Council, and the support of the Regional Government and initiatives already present at local and regional levels, FIWARE returns to where its first Summit took place a year ago and announces the Commitment between the FIWARE Foundation and the city of Málaga to become the official headquarters of the FIWARE Tech Summit for the next 5 years.

On the morning of Tuesday 28th November, the Mayor of Málaga, Mr. Francisco de la Torre, has opened the press conference of the FIWARE Tech Summit event; with the presence of Mr. Francisco Javier Salas Ruiz, delegate of the Regional Government and Mr. Ángel Ortiz, from SANDETEL, the public society to support the development of the Telecommunications in the Region; Fernando Valdés, representative of the Spanish Ministry of Industry, Economy and Competitiveness; Lars Nagel, managing director of the Industrial Data Space Association. And the members of the FIWARE Foundation: Yasumori Mochizuki, Senior Vice President of NEC Corporation; Hubert Tardieu, Chairman of the BoDde of the FIWARE Foundation and Advisor of the CEO in ATOS; and Ulrich Ahle, CEO of the FIWARE Foundation.

On behalf of the city, Francisco de la Torre has given the warmest welcome to the FIWARE Foundation and the whole Open Source Community, pointing out how this event, the Tech Summit, is the proof of a mutual interest and support between FIWARE and Málagal. He has also emphasise on the importance of the technology and its innovative potential, for the urban development and to improve the quality of life of the citizens, to overcome present and future societal and economic challenges. After that, the Mayor has joined the organisation, visiting the event and showing interest in the ‘powered by FIWARE’ smart solutions, shown in the exhibition area. 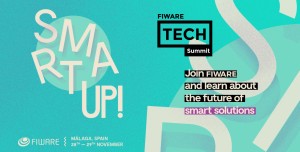 The FIWARE Tech Summit is an event specifically dedicated to technological and business development. On the 28th and 29th of November the Trade Fairs and Congress Center of Málaga (FYCMA) is gathering leading developers, startups, corporates and entrepreneurs from the worlds of Open Source, Smart Cities, Smart Industry, Smart Agrifood, and Internet of Things, to share experiences, discover new business opportunities, and to co-create the future:

Two-Day Event: from Tech to Business and everything in between

The event agenda will focus on developers and startups, with a special track for developers on both the 28th and 29th of November, and a track for startups and SMEs on 29th.

On November 28th, and under the umbrella of the FIWARE Tech Summit event in Málaga, the Industria Conectada 4.0 initiative and the Industrial Data Space Association (IDSA) will celebrate their first summit, connecting projects and achievements within the Smart Industry and Data Economy sectors, linking the Spanish, European and worldwide markets.

A series of special session will take place on November 29th: FIWARE is helping cities to complete their transformation into Smart Cities and being FIWARE-ready is becoming a prerequisite for any company wishing to become partner of a Public Administration in its urban development. Those attending the sessions will have the opportunity to meet the growing FIWARE Community creating Smart City solutions and will find out what the public representatives are expecting from them.

The collaborative framework between FIWARE and Andalucía keeps strengthening, reinforcing the development of smart ecosystems and entrepreneurial communities, with the FIWARE Zone, present in Málaga and Sevilla, as an active and fruitful example of this.

FIWARE Zone, a collaboration between Telefónica and the Regional Government of Andalusia –which has initiated its own process to formally become member of the FIWARE Foundation– invites all companies, entrepreneurs, teachers and University students, as well as the public administrations, to join and pitch in with innovative ideas, to build the Connected City of the future, which will be developed using open source standard technology.

FIWARE Zone plays an essential role in the expansion of the FIWARE iHubs initiative on a global scale, presenting its model for the development of a FIWARE iHub. The recent Open Call, launched on October 12th, will come to a conclusion at the FIWARE Tech Summit. The winners will be announced as pioneering iHubs: research and business centers that show the potential of the ecosystem and platform.

The prizes will be awarded by Ricardo Dominguez García-Baquero, representative of the Regional Government of Andalucía (Ministry of Agriculture).

The FIWARE Foundation is leading the community to achieve its mission, driving the adoption and development of FIWARE technology. Backed by ICT main actors, such as its Platinum members: Atos, Engineering, Orange, NEC and Telefónica; and, after just a year, the Foundation is about to welcome its 150th member. Most recent incorporations include companies and new individual members from Korea, Brazil, USA, Israel or Egypt.

For this Tech Summit in Málaga, the FIWARE Foundation is not only welcoming representatives from all its vibrant Community and the world of Open Source, willing to join the FIWARE ecosystem, but also the community around IDSA and the Industria Conectada 4.0 initiative.

The FIWARE Foundation fully supports IDSA in building a space to enable the Data Economy, where the security, trustworthiness and sovereignty of data are granted. A space that is based on an open, highly distributed, scalable and federated architecture. A Memorandum of Understanding between the IDSA and the FIWARE Foundation has already been signed earlier this year.

During the Tech Summit, the FIWARE Foundation will be also presenting new components of the Open Source Platform that has been created by business and research giants like NEC or Fraunhofer, emphasizing the importance and matchmaking role of FIWARE in the global ICT arena: